Royal Palace in Buda Castle is one of the most emblematic architectural masterpieces of the cityscape. The first royal residence on the Castle Hill was built in the 13th century.

Buda Castle (Royal Palace) is the historical castle and palace complex of the Hungarian kings in Budapest, and was first completed in 1265. The first, Gothic style royal palace was built during the reign of Louis the Great, King Sigismund and King Matthias (from the middle of the 14th century until the end of the 15th). It became a royal residence of European rank, with its Gothic and Renaissance elements. Buda was occupied by the Turks in 1541, and it was only retaken during the Christian siege of Buda in 1686.

The three-month siege has ruined both the Gothic castle and the residential part of today’s Castle District. Following the expulsion of the Turks, the restoration of most buildings was completed in the then-fashionable Baroque style, using the existing remains of buildings.

The construction of a much smaller Baroque royal palace was started in 1715, whose ground area was later extended. At the end of the 19th century, the place almost doubled in size, and a large back wing, today housing the Széchenyi National Library, was added. The architects, Miklós Ybl and Alajos Hauszmann have decorated the palace with Art Nouveau elements, in addition to the existing Baroque style.

In WWII, the palace and the Castle District were the last refuge of the Germany Army, which fell under heavy siege from the invading Soviet Army. The palace was again damaged; reconstruction started in the 1950-s. Leading architects of the age have announced that they wanted to return to the 18th century Baroque form of the palace, and at the same time keep its 19th century dimensions. They constructed a Baroque façade that never existed before. This was because 20th century architects saw no value in eclectic style, although this is now considered to be the most valuable aspect of Budapest’s buildings. 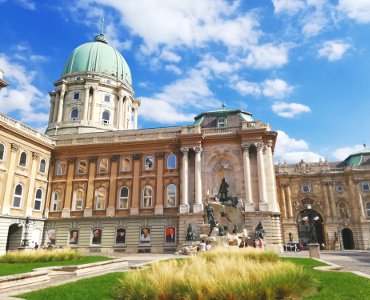 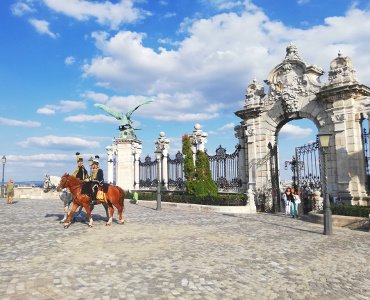 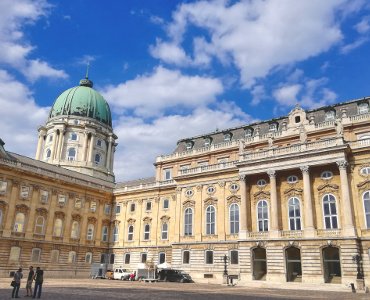