Budapest is the capital of Hungary. As the largest city of Hungary, it serves as the country’s principal, political, cultural, commercial, industrial and transportation center and is considered an important thermal bath hub in Central Europe. It is the 8th most populous city in the European Union.

Straddling a gentle curve int he Danube River, Budapest is flanked by the Buda Hills on its west bank and what is essentially the start of the Great Plain to the east. Due to its geographical features Budapest is considered one of the capitals with the world’s most beautiful location Architecturally, it is a gem, with enough baroque, neoclassical and Art Nouveau architecture to satisfy anyone.

The finest of the Habsburg triumvirate of Budapest, Vienna and Prague, the Hungarian capital is much grander in scale than the Austrian and Czech capitals.

Budapest is a city rich in historical sights, including the Roman ruins of Aquincum, the Turkish baths and the Neo-Gothic Parliament. At night it buzzes with lively bars and clubs, and offers some top-quality options for eating out. 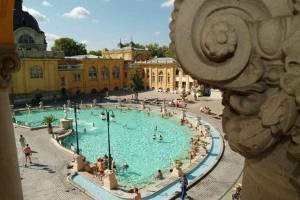 Excursions outside the city

Budapest Top Attractions: What to see

The Széchenyi Chain Bridge is the first permanent bridge over the Danube between Buda and Pest. Built in 1849, it played a major role in the unification of Pest, Buda and Óbuda later in 1873. Its Read more...

One way transfers: Airport to Budapest

One way transfers: Budapest to Airport

Transfers from Budapest pier to hotels